Outlook is used by users in variety and not just in numbers. That is because, not only there are more than a usual number of users, but they are in variety, i.e. operating the client from different Operating Systems. Mac users operate Outlook using the Office 2011, which is specifically meant for Macintosh users. However, the technical issues that both ends of users have to come across are sometimes similar. One such problem will be discussed in the post with an applicable solution to help users struggling with it. Storage space and limited file size related issues have always been the most common with Outlook and such is the case with the problem being discussed here. Outlook 2011 & Exchange 2007 issue: Unable to send message over 5 MB. A detailed description of the same has been given before along with a possible solution.

Outlook for Mac Unable to Send Message Over 5 MB with Exchange 2007: Workaround

Browsing the web for this trouble won't help much as most of the web pages that you'll encounter are forums that too, which have been left either with a probable solution or none. However, what this post will be explaining can be labeled as a fix, although it is still not sure that it will help me out. A number of times it is considered that the issue is with Exchange and not Outlook, which isn't the truth.

Outlook 2011 is compatible to communicate under the Exchange 2007 Web Services environment in place of WebDav. It has been discovered that while sending a message that is sized over 5 MB on total, an error will be encountered by the user on clicking the error depicting yellow triangle which reads 'connection to the server failed or was dropped. Details: Mail could not be sent. Account Name: "****". Error Code: - 3253'. 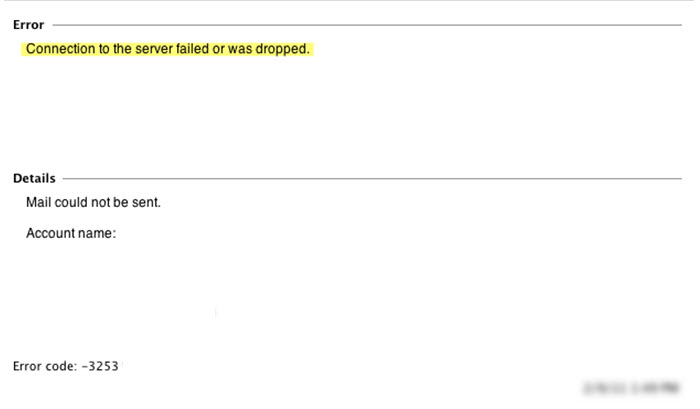 This message is later dropped by Outlook 2011 into your Drafts folder denoting the failure at sending the mail. As per the test we performed, the total size of the message tried being sent turned out to be 5 MB only.

NOTE: Above mentioned is the message size, because though the size of your attachment may probably be exact, but overhead is added to the messages of about 20-30% during MIME conversion.

Solution (As Per Testing):

First of all the web.config files need to be updated on the given Exchange Server directories, just in case they are causing the problem:

In the process, all that was done was some modifications of the settings and the way messages were handled by Exchange. A few modifications were made to the web.config files attribute namely, 'maxRequestLength'. That changes from the default value of 10240 to a newly defined value of 30720. This way, the message handling size was increased so that inability while sending messages over 5 MB won't be faced any longer.

Then, IIS or Internet Information Service was run and the Server was Restarted.

TIP: You might need to click on Restart more than just once due to the buggy nature of IIS.

Observation: This might probably help in resolving the Outlook for Mac 2011 & Exchange 2007 unable to send messages over 5mb issue as the primary issue was relating the size of the message. In case the failure is encountered again along with a similar error, kindly check other possible causes like network related, configuration, or other.